Ruska in Finland; Wonderful days at KulttuuriKauppila (still hard to spell and say) in Ii, and Anthropology in Vienna 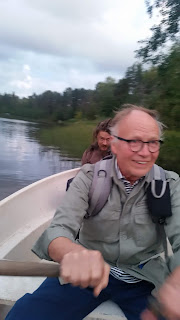 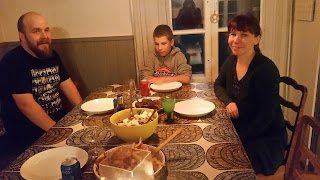 Ruska in Northern Finland means the beauty of autumn light, yellow leaves, temps in the 30s and 40s, the possibility of clouds, rain and snow. It's getting dark earlier. My last week here in Ii included writing, long walks and bike rides, dinner with Antti and his family (he made moose steak with grilled local mushrooms in cream sauce).  I was rowed home from a party by a father and son about whom I wrote a new poem (here's a small bit of draft). 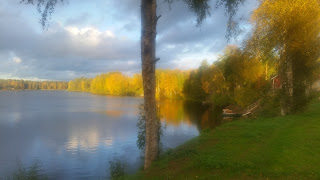 "The father rows, oars up and over shell. Sturdy certainty of a river's current, home from Illinsaari. The 20-something son's tangled hair in his face. He rolls his own cigarettes and smells of them." 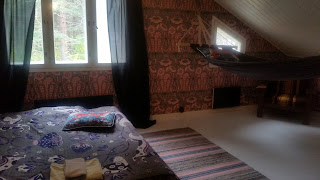 I took a big car ferry to the island of
Hailuoto, in the Gulf of Bothnia, with a population of about 1000. I was generously welcomed by Sanna and her husband Aki who organize a popular music festival on the island in summer, BattreFolk and who are planning to make their artist and writers' residency an international one. I stayed in this lovely room one night and met Finnish poet Silja
Jarventausta https://fi.wikipedia.org/wiki/Silja_J%C3%A4rventausta. We had a l smoke sauna in the evening and talked poetry. I will come back! 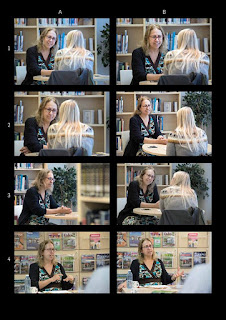 I was invited to give a talk on American Literature by Heini Perttula of KulttuuriKappila and librarian Minna Halonen at the local public library.  I enjoyed sharing my thoughts on the importance of slave narratives, the poetry of Whitman and Dickinson, the Thoreau of "Civil Disobedience" and the environmental ethos of Walden which Finns can relate to. I also took questions on and spoke of writers like Kate Chopin, Junot Diaz and Toni Morrison, Elizabeth Strout. The audience was interested in the #metoo  movement. Some of the books were available in English and some in Finnish; some local people attended, and graduate students at nearby University of Oulu. Just like in the U.S., Finns are reading less literature and spending more time on line.  In these photos to the left (I need a haircut!) I am being interviewed by Anni-Sofia Kauppila for an article in a cultural magazine of Northern Finland that will come out in December. Thanks to Anni-Sofia and Jan Aqvist for this piece on how my writing and research are informed by Finland and the work of Sami artists. 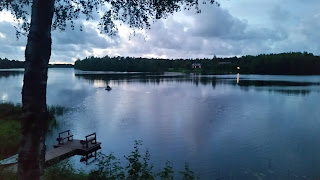 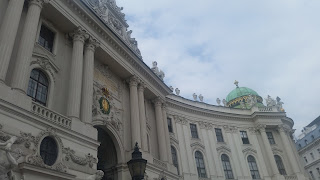 I went to Vienna to the Vienna Anthropology Days conference https://vanda.univie.ac.at/home/  where I presented my talk on Sami response to mining and extraction on a three-session panel on art and violence. The papers were fascinating; I did get emotional over one that was about kids in Austria who were given chocolate guns made by an artist; the kids were filmed by her collaborator as they attacked each other by ambush and took bites out of the guns too. For Americans, I said to the filmmaker and audience, our children are being shot with real guns and it's not something to easily parody.  I don't know if he understood. 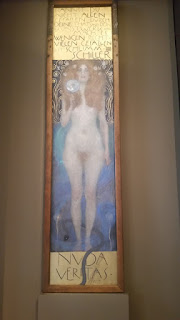 Klimt!  Vienna has amazing grandeur in its former palaces and residences, many of which are now museums, but I only went to one. The Hapsburg dynasty ruled in southern Europe for so many years and was ostentatious about showing off its wealth and power. I took a walking tour in the short time I had. Guides in Austria must study for two-years to learn the history and take a test, so they are great. 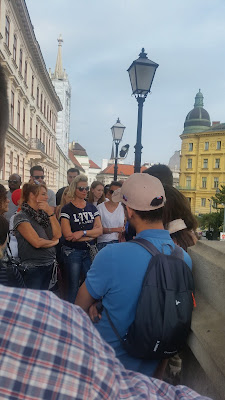 This past week, my flash fiction piece "Grade Book" was published by Cheap Pop Lit. http://www.cheappoplit.com/home/2018/7/26/grade-book-cheryl-j-fish

Thanks to the editors for publishing it. Give me your thoughts! Hope you are all well and enjoying autumn. I am on my way to Lapland--taking a road trip with friend Marjorie from NYC.
Posted by Cheryl at 2:24 AM No comments:


The Sami along with other first nations leaders from Canada and New Zealand have been in Finland not far from where I am living to protest a planned railway development though the Boreal Forest. The railroad would encourage more mining, forestry and other industrial development as climate change means melting Arctic sea and industry has its eye on a path to cut through areas important to the Sami for reindeer herding and for their way of life. I can't keep up with all the activism and amazing film, video, protest art and other eco-media being made in resistant to colonization and extractivism. I knew when Standing Rock took place in North Dakota it would inspire global protests..luckily these are peaceful and I haven't heard of police showing up just yet. It is significant that the Sami and allies speak out as they are ignored by the Finnish government even though the Sami have rights in the Finnish constitution. I spoke with two researchers at University of Oulu who were very helpful to me, Marko Jouste and Hannu Heikkinen.  I am preparing for my
presentation at Vienna Anthropology Days https://vanda.univie.ac.at/home/ 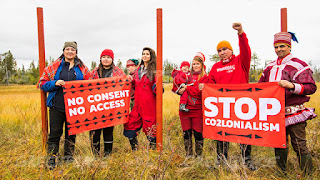 and I am not organized because I can't
mention all the new material that I am
finding here.  It will be my first time at
an anthropology conference and my first time in Vienna.

Meanwhile, I went to Oulu, the bigger town around here but still a small city. 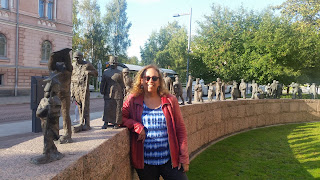 I am standing with Sanna Koivisto's sculpture Course of Time, which shows all the various people in history from King Charles IX when Sweden ruled Finland, to a postman, a society lady, a shopkeeper and a female doctor. Sanna is one of the founders of the KulttuuriKauppila residency and art park and my good neighbor with whom I had my first sauna session of this trip...She also inspired a poem I am working on. Here is the link to the description of me that the residency put on line:
https://www.kulttuurikauppila.fi/en/news/cheryl-j-fish-kk-air-9-2018-2/

There is a wonderful Environmental Art Park in Ii, and I am including some photos of the art from there, many of whom held the residency here, or were part of the ART Ii Biennale held every two years. The one in 2016 focused on Sami artivism.

I met Heini and Sanna, two of the 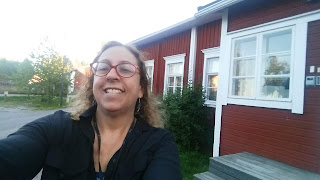 folks who make this place run!

Sanna took me for a walk in the woods, and I met her dog and chickens. 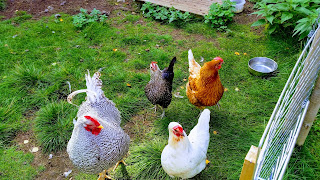 After working on a new poem and having my official artist-in-residence photograph taken, I went for a swim
in the Ii river. Cold even for me, and no sauna before! The temperature here is mid-60s but going down to the 50s.  Signs of autumn everywhere as I  pick bilberries, similar to blueberries but smaller. The lingonberries are  out too, tart and red.  I had them with my yogurt for breakfast, and also ate local apples. 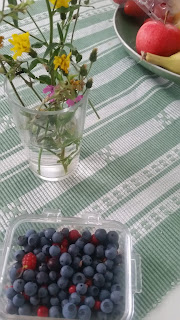 KultuuriKauppila is know for its  ART Ii Biennale and in the woods near the residency, you can see the MY NAME IS NATURE: Please Fuck Me sign made by Sami artist Carola Grahn http://www.carolagrahn.se/
who I met in New York a couple of years ago. Not everyone around here is pleased with this, but I think it makes a necessary statement. 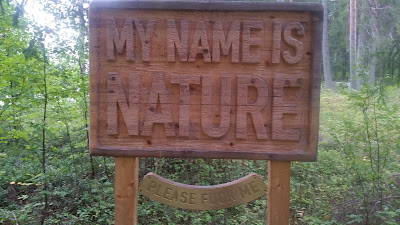 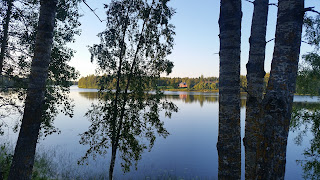